In Tutorial 2 we looked at a device Profile that used only GPIO attributes and involved no external MCU. In this lesson we’ll add an Arduino as an example of an MCU that communicates with the Afero Secure Radio. This will demonstrate how you can incorporate ASR into a more complex product.

This project will provide the mobile user a start/stop control for LED blinking. When the user taps Start, an MCU attribute is set, which tells the Arduino to start a loop that blinks the LED on and off. This blinking will continue until the app user taps the Stop control to halt it.

In addition, the mobile app UI will demonstrate the use of a second control, used as a read-only indicator, that reflects the state of the blinking LED in real-time. When the LED is blinking on the development board, the remote mobile app will provide a blinking display as well: 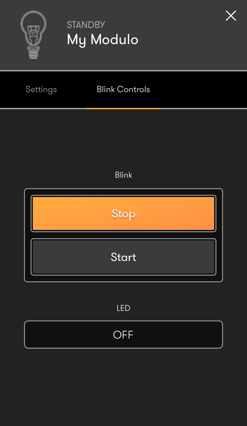 First, we’ll run through the example, then take a closer look at how it all works.

Be sure you’ve done the following before starting the steps below:

This section gives you a bit more insight into what’s happening behind the scenes.

The device Profile in this lesson has two GPIO attribute definitions similar to those in Tutorial 2, but has an additional MCU attribute. This MCU attribute is a Boolean, made Writeable so that clicks in the mobile app UI can set the attribute value. We’ve named that attribute “Blink” because it will turn on/off the blinking of the LED. 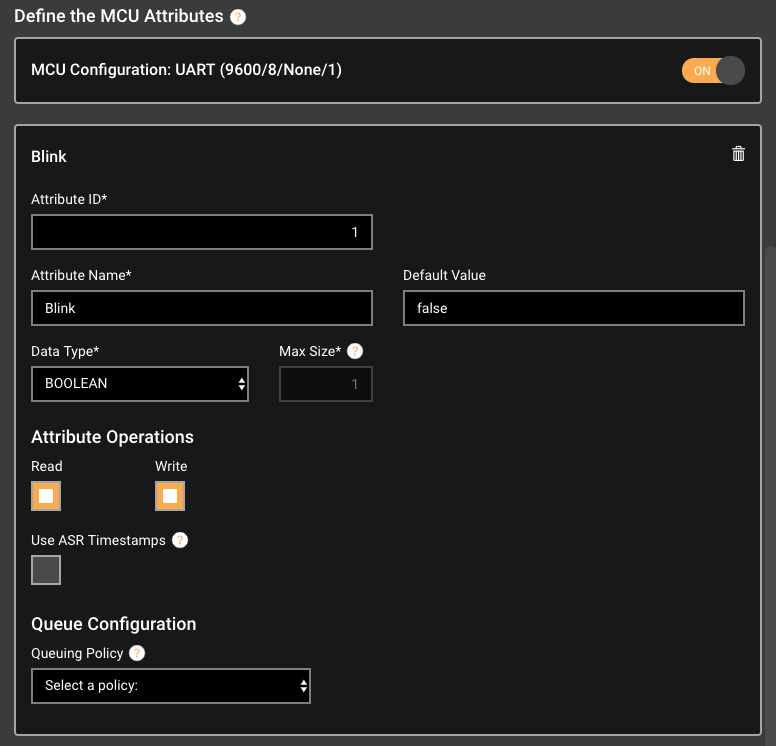 We plan to use menu controls to represent the two GPIO attributes defined in this project. We’d like to have user-friendly labels representing the GPIO values in the mobile app UI. To do this, we’ll define attribute options consisting of Value Options, as follows. 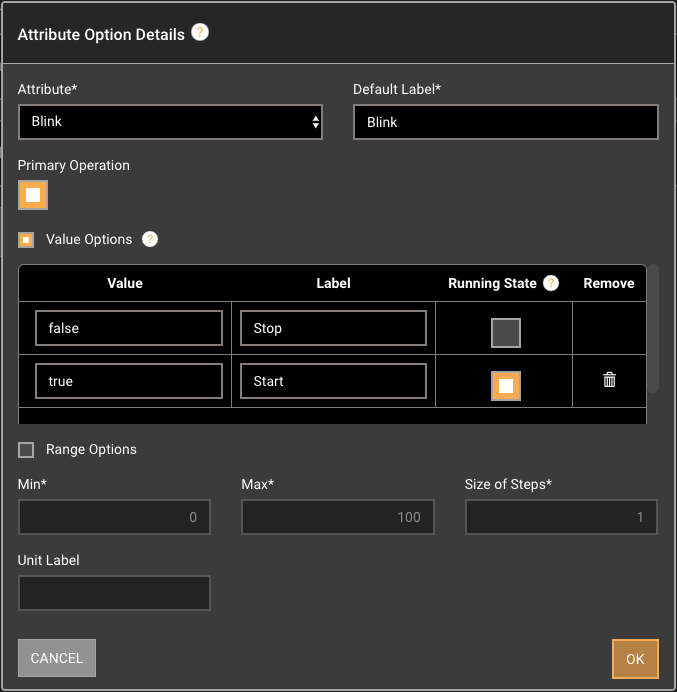 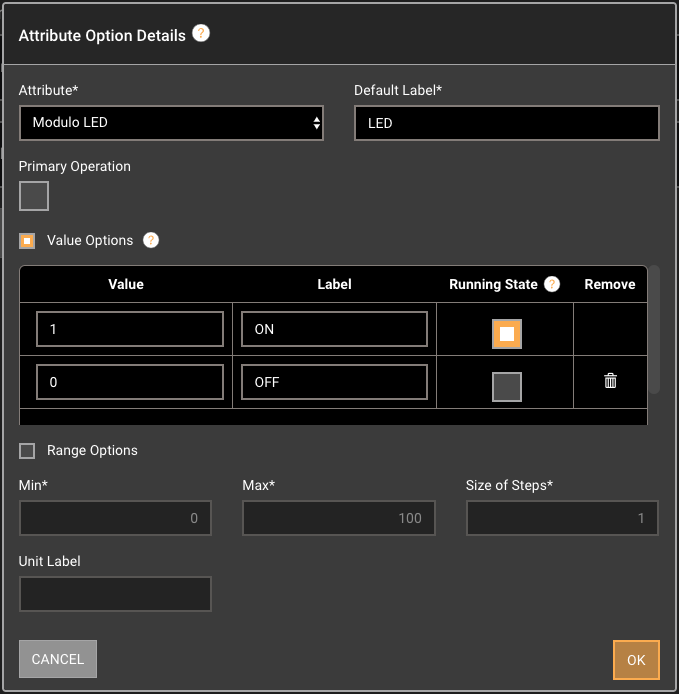 As described earlier, our mobile app UI will consist of two controls: a Menu control linked to the Blink attribute, and a read-only Text Box control, linked to the Module LED attribute. Assuming you’ve worked through Tutorial 2, you’ll find it simple to define these UI Controls.

Note that although this device Profile has three attributes, we define only two UI controls. There is no requirement that every attribute you define has a corresponding UI control; UI controls are required only for attributes that must be viewable and/or modifiable via the mobile app UI.

Remember that every UI control must be a member of a UI Control Group even if it’s the only member. In this case, we’ll create a single Control Group, named “Blink Controls” and place both controls into it.

Since both controls belong to the same group, they will both be visible on the same screen in the Afero mobile app. If your application has many controls, you should organize them into groups that will make functional sense to the user when displayed together.

As you saw when you ran through the lesson, this Profile results in a mobile app UI consisting of buttons that control the Modulo LED: tap Start and the LED starts blinking; tap Stop and the blinking stops. While the LED is blinking, the “LED" control in the Afero mobile app UI will also change its label to reflect the LED state.

What’s Happening on the MCU

Recall that when the UI gets a tap on the Start control, a message to the Afero Cloud tells the MCU program to start blinking the LED on the Modulo. Here’s the Arduino console output when we tap the Start button in the app UI to start the blinking, and after letting the LED blink a few times, tap Stop to halt:

In the first line of output we see the MCU program logging execution of attrEventCallback(). We know from the afLib API that the MCU runs attrEventCallback() when ASR has executed af_lib_set_attribute*(). So we know that ASR must have called af_lib_set_attribute*() to tell MCU to set attribute 1 to value 1, and the MCU is handling that. How does that happen?

Take a look at the MCU’s attrEventCallback() definition (some code snipped out for clarity):

What’s happening here is that the user’s tap in the mobile app UI goes up to the Afero servers as a message to change the value of attribute #1 (AF_BLINK). The message results in a call to attrEventCallback() that specifies a request has been made to set the value of MCU attribute AF_BLINK. In response, the MCU code above sets a local variable, blinking, to the new value of the AF_BLINK attribute. It then calls af_lib_send_set_response(), which it must to do confirm that the change was made.

Back to the console output, where we see several lines containing attrEventCallback calls with attribute ID AF_MODULO_LED. You probably recognize that the alternating 0’s and 1’s reflect that the LED is being blinked.

Based on the afLib API, we know that attrEventCallback() is executed by the MCU whenever ASR sends an update message about an attribute change. So we deduce that ASR is sending updates every time it changes the value of GPIO 0 (the LED). The one piece of the puzzle we haven’t seen is what’s making ASR change that value. One more look at the code:

And there it is: while variable “blinking” is true, the MCU calls setModuloLED() every BLINK_INTERVAL (0.5 seconds) to set the GPIO attribute to the opposite state. In response to that call, ASR updates the attribute, and then sends an update message, which causes the MCU to execute attrEventCallback().

In a typical product containing an MCU, any LED indicator in the device would likely be connected directly to the MCU, whereas in this example we have used the LED on the dev board. The difference is that in this lesson, the MCU changes the LED state by making a af_lib_set_attribute() call, which causes ASR to make the change and send an update; whereas in a product, the MCU would probably set the LED directly. We used this design not only for setup simplicity, but also to emphasize the way attributes are affected by making af_lib_set_attribute() calls.

The flow above illustrates the basic messaging pattern:

Up to this point, we’ve confined ourselves to discussing attributes that you, the developer, define using the Afero Profile Editor. It turns out that every device Profile you define also includes several other attributes defined automatically by the system. These are called system attributes.

In the sample above, you can see that the file begins with a set of defines that simply provide names for the data types that will be described in the remainder of the file.

Following that, you should see something that looks familiar: the define for the AF_BLINK attribute. We used the name AF_BLINK to refer to attribute #1 in the sketch we developed earlier in this exercise. At this point we’ll note two features of this attribute:

After the definition of AF_BLINK, you see another attribute you created: AF_MODULO_LED. This is one of the GPIO attributes you defined in your Profile. GPIO attributes start at ID 1024, and each GPIO has a pair of attributes:

Starting with ID 2001 and above, you’ll see attribute definitions that you did not create when you defined your device Profile. Above 65000, the attributes have names that start with “AF_SYSTEM_”. These are the system attributes. We won’t describe all of the system attributes here, though most have names that explain their purpose clearly enough. In general, you can ignore these attributes, but because they are defined in the device-description.h, you can access them in your sketch. In fact, one of these attributes is critically important for you as the author of MCU code: the AF_SYSTEM_ASR_STATE attribute.

In most cases, you can ignore the system attributes, but when your project includes an MCU, you’ll need to pay attention to the AF_SYSTEM_ASR_STATE (a.k.a. ASR_STATE) attribute. That’s because this attribute is used to provide your MCU code important status information about your ASR in real-time.

The ASR_STATE attribute can have one of a small range of values, or “states”:

Let’s take a look at how your code can use three of these events:

What to Do When You Receive the “Rebooted” State Message

A typical way to respond to the Rebooted state is to set a variable that indicates your code should hold off on afLib requests until it hears that ASR is Initialized. In skeleton form, this might look like:

As noted above, ASR will send the AF_SYSTEM_ASR_STATE “Initialized” message when it is ready to handle requests from afLib. Requests made before this message may lead to unexpected results. So, as seen in the example above, it is typical for MCU code to avoid making any afLib calls before it receives the Initialized message. Note though, that even during the pre-initialized phase, the MCU code must regularly call af_lib_loop().

In the example above, you can see that we keep track of the pre-initialized state in the variable asrReady. The main loop() does nothing except call af_lib_loop() if initializationPending is true. Once the signal AF_MODULE_STATE_INITIALIZED is received, asrReady is set to true, and the application code will run. Any time ASR is rebooted, though, asrReady is set once again set to false, and the code resumes waiting until it gets the all-clear.

How to Handle a Reboot Request

The status “Reboot Requested” means that ASR has received an over-the-air (OTA) software update, and requires rebooting for that update to be installed. If your project does not include an MCU, then the reboot will execute automatically, as soon as possible after the update has been received. However, if your project includes an MCU, then responsibility for triggering the reboot falls on the MCU code. This allows your MCU to restrict the ASR reboot to times that are safe for your application.

So, you need to watch for reboot requests, and you need to respond by signaling ASR to reboot – how exactly do you go about this? Well, of course, this is all about communication via attribute values!

In the above definition of attrEventCallback(), we check the supplied attribute ID, and if that ID is AF_SYSTEM_ASR_STATE, we check the attribute value. If the value is 3 (AF_MODULE_STATE_UPDATE_READY), we’ve been asked to reboot ASR. We trigger that reboot by setting a global, asrRebootPending. In our main loop() function, any time asrRebootPending is true, we’ll call af_lib_set_attribute_32() for the AF_SYSTEM_COMMAND attribute, with value 1 (which is the value that signals a reboot). Notice that our code resets asrRebootPending to false if it succeeds; if the set_attribute() call fails, we’ll try again next time around the loop().