This section describes the overall architecture of the Afero Secure Linux Device SDK (“Afero Linux SDK” for short). It also includes an explanation of how the components communicate with each other. The Afero SDK enables Linux devices to operate as an Afero edge device and provide hub functionality for nearby Afero powered Bluetooth® low energy (BLE) devices on the same user account as the Linux device.

This page contains the following sections: 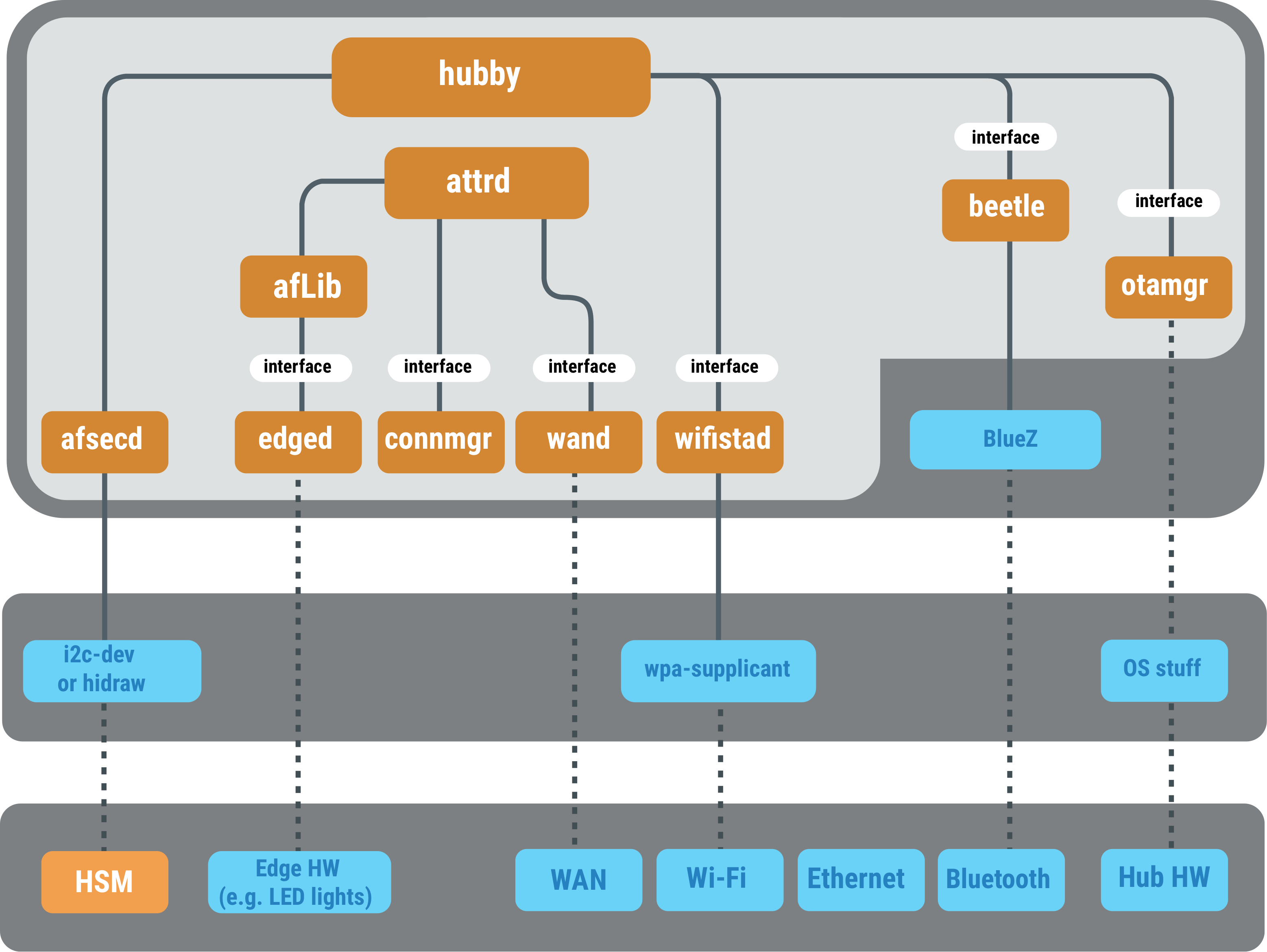 The Afero Secure Device on Linux

The Afero Secure Linux Device SDK relies on several Linux components, including the TCP/IP stack, iptables, the I2C device driver, and Unix Domain Sockets. The implementation is based on Yocto to simplify the build and distribution of the sample software; however, the Afero Linux SDK package can be adapted to almost any Linux distribution. The software is not sensitive to the Linux kernel version. Note that some of the software writes to the root filesystem.

Each component in an Afero Linux device functions as follows:

The Edge Device daemon is responsible for edge device functionality; for example, controlling an alarm siren, or measuring power consumption on an electrical outlet. Such functionality can be controlled using Afero attributes. Edge devices have a special attribute space that is separate from hub functionality. The specific attributes can be encoded into the Afero device Profile, which is created using the Afero Profile Editor development tool.

We provide the following ways to implement the edge attributes for your device:

Both methods are discussed in Attribute Daemon Client Implementation.

Afero provides hubby as a binary, logging its state to syslog. The verbosity of the log is defined in the device Profile.

One special feature of hubby is that it provides Bluetooth low energy connectivity when it is unable to connect to the Afero Cloud. This allows a user to set the Wi-Fi SSID and WPA passphrase. The credential transfer is done so that it is not possible to get the passphrase by sniffing the Bluetooth traffic and the Wi-Fi traffic. Additionally the Afero Cloud only sees an encrypted passphrase and does not have the key to decrypt it.

beetle communicates with hubby through a localhost socket. It supports both Bluetooth low energy central and peripheral modes; peripheral mode is used to set up the Linux device’s Wi-Fi.

Afero provides beetle in source form. For more information on implementing a version of beetle for your specific Bluetooth stack, contact Afero.

The Afero Security daemon provides an interface to the Afero Hardware Security Module (HSM). The HSM is used for the following:

afsecd can also use the hidraw interface to talk to versions of the Afero HSM connected over USB.

The Afero IPC library is a shared library providing inter-process communication (IPC) between all the daemons. The communication is based on named Unix domain sockets. There are two separate APIs for this library: the server library and the client library.

Please note that af-ipc is based on the libevent2 event system. This has implications for the rest of the system; specifically, the entire API requires the application to set up an event loop. In addition, hubby itself is based on libevent2.

The af-ipc library also includes a Remote Procedure Call (RPC) layer that serializes integers, strings, and binary blobs so they can be sent to another process using the af-ipc layer. The IPC and RPC functionality are used heavily by the Attribute daemon.

Afero provides af-ipc in source form, which builds into a single static library.

Communication with the WPA supplicant is performed through the same Unix domain socket the wpa_cli application uses.

The WAN daemon maintains a network interface over a cellular network. It also communicates the cellular modem state via Afero attributes, both to the Connection Manager so it knows the state of the modem network, and to the Afero mobile app so the user can debug connectivity issues.

The WAN daemon sample code supports the Cinterion ELS61 wireless module and the USB-connected Sierra Wireless HL75xx modems based on the Intel/Infineon chipsets, but it can be adapted to other modems by modifying the modem-specific Radio Interface Layer (RIL). It is not particularly well suited to the Qualcomm modems that have built-in application processors like the MDM96xx series because the WAN daemon is designed around a USB-connected modem.

The WAN daemon is provided as sample code in source form. It builds into a standalone daemon that is also a client of the Attribute daemon, which implies that it uses libevent2. The modem power states are managed separately by a script called wancontrol. The network setup is performed by another script called wannetwork. Implementing a WAN daemon is the subject of the WAN Daemon Implementation.

Firewall functionality is optional; you can disable the firewall by invoking connmgr with the -d option.

To determine if a connection is up, the Connection Manager relies on all of the following:

The routing changes are done by changing the route metric of the default route. The Connection Manager currently does not change the DNS name servers when it switches between network interfaces.

The firewall code is distinctive because it maintains a whitelist of allowed servers based on host name and not IP address. This distinction is required to accommodate the dynamic load balancers in the Afero Cloud. The Connection Manager uses libpcap to monitor DNS lookups, and if the request is for a host name in the whitelist, it opens up the resolved IP addresses in the firewall. This feature is useful for devices that wish to act as an access point for Afero Wi-Fi devices. For devices that are Wi-Fi stations only, this special firewall feature may not be necessary; blocking all incoming connections may provide sufficient security.

The otamgr daemon allows you to use the Afero Over-the-Air (OTA) Service to update the firmware in your Linux devices. The Afero Cloud OTA service enables binary blobs, such as new firmware or new configuration files, to be sent to all devices in the field in a way that ensures the integrity of the delivery. Specifically, the OTA service signs the firmware and sends it to a pool of devices. On each Linux device, the hubby application receives the firmware and validates the signature using the Afero Hardware Security Module before informing the otamgr daemon (via an Afero attribute) the location of the validated firmware in the filesystem so otamgr can install the image on the device.

Use of the Afero otamgr daemon is not required. If you do choose to write your own OTA Manager, because the hubby application takes responsibility for downloading the image and broadcasting an attribute-based event, you must implement comparable functionality on your own OTA Manager and listen for the event broadcast. If you do use the Afero otamgr, you must provide a script that serves as a trigger point to update the image. The script must be named sysupgrade and must be located in the /sbin directory.

Note that the OTA service and its tools are not part of the OTA Manager. The OTA service and tools are responsible for signing and securely transporting/downloading the image to the devices. The OTA Manager takes over and installs the image once it has been downloaded to the device. You, as the third-party, are responsible for generating the OTA image (the “blob”) and the mechanism (e.g., a script or daemon) that triggers the update.

The Afero Linux SDK software packages depend on several standard Linux libraries and packages, called out in the DEPENDS section of the Afero software package recipes in Yocto:

Next: Software Tasks for Creating an Afero Secure Linux Device